When I was growing up, there were like three people proud of being Muslim in American media: Muhammad Ali, Kareem Abdul-Jabbar, and honestly, I can’t even remember. Non-Muslims looked at me with confused, empathetic eyes that said, “You’re like, Kwanzaa, right?”

Then, one by one, I found out about the secret Muslims: Dr. MEHMET Oz, Shaq, Ice Cube (for U.S. actor & rapper see > Ice Cube), Ellen Burstyn, Iman, Cat Stevens, Busta Rhymes, DJ Khaled, and the inventor of Lasik. 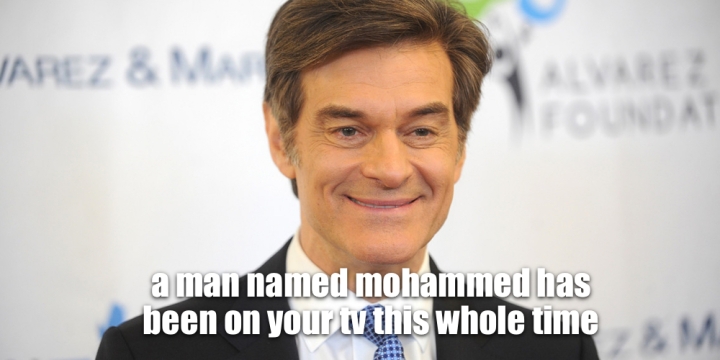 Except they weren’t secretly Muslim at all. Their Muslimness was just obscurely reported. They were known as ‘TV Host’ and ‘Doctor’ and ‘Rapper’, and their race and religion were a tiny footnote on their Wikipedia page, like they were a White person accidentally trapped inside a Black or Brown body. Whoops! Not the first time that’s happened.

They Mos Def (also Muslim) could not be branded as Muslim, because Muslims were branded as terrorists, carefully curated with images like Jafar and Arab Gunman #2. Speaking roles all had the one line, “AYAYAYAYYAYAYA ALLAHU AKBAR!” because who even says that? I’m serious, which terrorist said that like one time and made it a thing?

Times have changed. We have Zayn Malik and Gigi Hadad, and they sometimes have each other. Halima Aden is haute. Olympian Ibtihaj Muhammad is a kickass Barbie doll, which in itself is a far cry from the nip-tucked play-things of yesteryear. (Though for a while, there were Bratz, which I daresay were much worse. But hey, progress isn’t linear, Donald.)

We. Even. Have. Lindsay. Lohan… AYAYAYAYAYAYA ALLAHU AKBAR!

And, after the dust settles (or kicks up!), I will not be surprised if Kanye emerges Muslim.

On TV, we’ve seen baby Aziz pop bacon, Seattle Grace has a Muslim woman doctor who goes topless for medicine (a huge stride for Brown parents everywhere, that is, until she will inevitably have hot sex in the in the steamy sex den that is a break room), and Hasan Minhaj just did an uncle wrist-twist on his very own Netflix original series. Riz Ahmed is a thing, Ramy Youssuf has a Hulu series coming out, Mo Amer has a Netflix comedy special. (Notice I’ve mentioned a lot of men… sorry, patient footstools, I mean, Brown women, our time will come? I’m waiting on that Maysoon Zayid show though.)

With all of these multi-cultural, messy Muslims giving me life! and making narrow-minded uncles lock up their daughters from the corruption of This American Life, we still have our work cut out for us.

So I’m here to make some claims.

I’m here to snatch up and broadly label people with a Scarlet M because the world is kind of scary and there’s power in numbers? And I don’t care if you’re 1% Muslim or 5, or if you’re actually Catholic with a Quranic name, because Isaiah, Jesus, John, I am coming for you.

Tarek El Moussa. Formerly married to Christina EL MOUSSA, DO YOU SEE THAT LAST NAME? ARE WE EVEN LOOKING?! Of Flip or Flop legacy, on freaking HGTV. 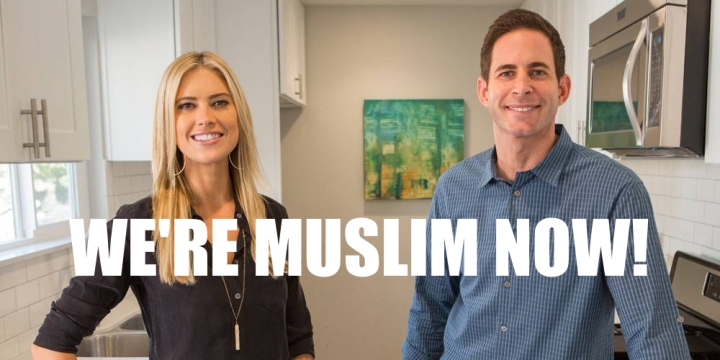 You have been claimed and your Muslim name is Joanna Gaines.

Nicole Curtis. Also… from HGTV. Rehab Addict. I just think she would be good for our brand.

So, claimed, I’m claiming her.

I’m listing a lot of HGTV people here… I don’t know why? Maybe I should move on… yes? Okay, moving on.

Barack Obama? I believe he has already been claimed by Fox News.

Donald Glover? Why not.

Beyonce? Beyonce claimed us all and is thereby part Muslim. 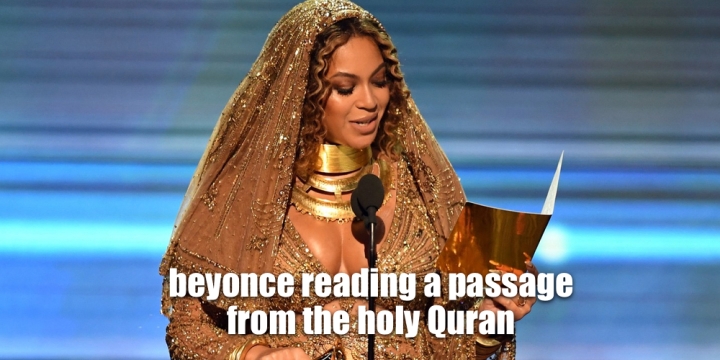 I could go on, but rebranding people individually takes a lot of work, and we need to go mass market quick. That’s why I snuck into Campaign Finance Boards across the nation and I redesigned voter stickers to look like this:

Maybe this will scare White women out of voting for White men who hate all of us.

Indoctrinate others with this:

One thought on “Beyonce Is Muslim, Now (And So Is Everyone Who Voted In Midterms)”

I’m a writer, producer, director and performer from California, based in NYC. I co-founded Stranger Magic Productions, where I make TV shows! Read more→